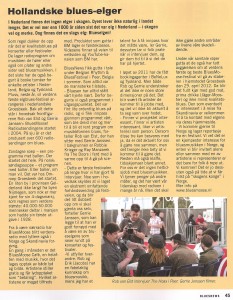 In The Netherlands you find no moose in the forest anymore, there is no natural habitat. It’s been more than one thousand years ago since the moose habituated the Dutch forests. Nowadays there’s only one kind of moose left: The Blues Moose.

Usually they can be seen when there’s quality blues being played at concerts or festivals. They also make a radio show about the music at the festivals, as well as about records and other parts of the blues music. Lately they have also started to book tours for selected artists, through The Netherlands, Belgium and Germany. Plus – next year, the worlds first Moose Blues-festival will be taking place in the Dutch city of Groesbeek.
Behind all this is mainly the front figures Rob van Elst and Gerrie Janssen: BluesMoose!
They started their radio shows in 2004 and since then they have produced more than 600 radioshows, all about the blues.

Zondagse soep – een programma met ballen. That’s where it all started. In Norwegian: Sunday soup with balls. Or balls. (Impossible to translate this Norwegian pun…Tommy). It was all happening at Omroep Groesbeek. A small city in the province of Gelderland, not too far from Nijmegen, which to Norwegians is probably more known due to it’s 4-day marching festival – the biggest in the world: 40.000-50.000 people participate in the march that started up back in 1928.

From being a local radio station, BluesMoose has become a radio of the world, with listeners also in Norway and the rest of Scandinavia. Once a month there’s BluesMoose café, an evening dedicated to live music, which is all recorded to both audio and video. The artists do it for free, and get to keep the recordings as a thank you. Something the artists are very satisfied with, since the product delivered by BM is ranked first class. The videos then find their way to the website and YouTube channel of BM.

BluesNews managed to get the guys talking during Belgian Rhythm & Blues Festival in Peer, Belgium last summer. As always the guys were present.
– The blues has always been close to our heart, which is why we started the show to begin with. We didn’t really think the real blues got enough airplay, and thanks to this, our radio show turned more and more towards a pure show about blues music, Rob van Elst explains, together with Gerrie Janssen. In the background Robbie Krieger and Ray Manzarek is warming up to perform.
– This is the first festival in a very long time where we are not so active during the festival itself – we made a very extensive preview of this festival, so it’ll be double doses if we are going to repeat ourselves after the event, Gerrie Janssen says, adding that he is very pleased to be one of the Blues Moose racing around to gigs and festivals.
– We complete each other a lot. Rob and Erik (Jacobs) possess a fabulous knowledge about blues music, while I have a talent to get us access wherever it needs to be, Gerrie laughs. – Besides that – we let people talk when we interview them, and give them time to say what they want.

During 2011 they have started to book artists in both BeNeLux and Germany, but Rob and Gerrie underline that there are no massive dimension on what they do. They will be working with a small selection of artists, and they will not work themselves into the ground.
– It all boils down to three main points: Do we like the artist as a person, is the artist interesting and can the project create an interest! If all those three questions can be answered with a yes, well, then we can perhaps do something together, but that doesn’t mean we have to do it. I mean, everything must fit – time schedules for instance. We do not work full time with the music. Our income is generated from our dayjobs, and the radio has been our passion for years now, but the rule is that nothing of it is going to have a negative impact on our lives.

During our conversation the guys reveal the decision that has been taken to host the worlds first and best BluesMoose-festival in the hometown of Groesbeek on the 29th of April 2012. It will be a full steam event with good, good drinks (Jäger-Mooster) and last but absolutely not least, quality blues. Anyone interested in going down from Scandinavia can contact the Moose through their homepage.
– We would love to visit Norway and do a report from a festival. The enthusiasm around the blues music in Norway we know all about and whether we are invited alone or together with one of the artists we represent, it’s just for people to let us know. Also it’s about time we get to meet the “King of the Forest” in Norway.
More info at www.bluesmoose.nl.